Week 10 on PhotoPeach- An audit of my blog….Enjoy!

Nominating For The Edublogs Awards

I am what people might call a “Perfectionist”. I like to be absolutely sure of what is going to happen and to do this I plan and organize pretty much everything. So, it was really no surprise when I chose to write about my future since it would be easy for me because I  already know what I want to do, when I want to do it, etc.

I always want to study in a reputed school or specialized program which will help me later on in life and be a step ahead of the others. For example, in grade 6 (next year) I am going to middle school and will be taking a course on business and technology called IBT. To get a spot in this program I needed to score high in their entrance test and be kind of lucky for the lottery part of it. In high school, I want to follow the same standards, but maybe a different program. For university, I want to study in Harvard majoring in either business, medical or law and I would like to minor in literature. I’ve started preparing now, believe it or not, by doing various extracurricular activities and achieving good grades.

Now my career……I will become a lawyer, businesswoman or doctor (depending on what I major in). I will definitely be a part time author. Both my parents are in the technology field, so I will probably incorporate coding and computer science somewhere in my profession. My main focus will be my work and my writing. If something I write becomes popular, I might quit my job and become a full-time author!

When I grow up, I want to have 2 children; a boy and a girl. I’m not sure if I’ll move since Canada is such a nice country, but who knows what could happen! I want to my house to always be tidy and neat because dirty isn’t really my style.

My future is something that I have planned out perfectly and I hope nothing goes wrong! You should, of course, always keep a backup plan for an unexpected setback which is something I do have……but that’s a post for another day!

I am not sure why, but last week our class did not participate in the challenge. But, this week there is! For this week, we were asked to choose from the list of activities 1 thing to do. I chose to do the challenge where you find out about different and interesting ways children get to school around the world. To show my ideas, I did a slideshow on ‘Animoto’, one of my favourite slideshow makers! If I forgot anything, please let me know in a comment. Thanks!

Create a post on how to do something. Watch the prezi to learn how to braid hair!

Here is a REALLY simple story that I wrote:

“Jenny goes to the market. On the way, she sees a store called ‘Scooter Palace’ which is having a sale. A pink scooter catches her eye. She buys it and then rides it all the way home!” Now, here is that same story in pictures: 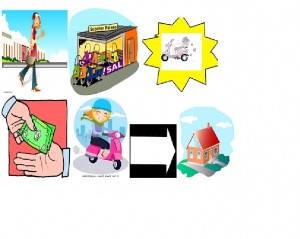 The challenge of the week–Blog Challenge Week 3– is here! I made my “Interactive Poster” on a site called “Kerpoof!”. The site is owned and operated by Walt Disney! Anyways, enough with that; here it is! (If you click on it, it gets bigger!) 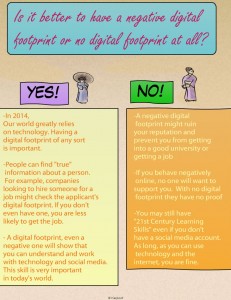 Guess what? The Student Blogging Challenge has started up again! Our class started at Week #2. For this challenge, I chose to do “Activity #4”: Create a quiz about your state or country. I live in Canada so I called mine “Canada Quiz”. Unfortunately, the website that I used to create my test didn’t allow me to embed it. But, no worries! If you just click on the link below, you could take a quiz of 10 Cool Canadian questions! Good Luck and Have Fun!!!!!☺☻

sbc10 by mrwoods on GoAnimate

1. I nominated http://kidblog.org/SpiegelmanScholars/. It is a class blog in the U.S. taught  by Melissa Spiegelman. I liked their blog because the layout was interesting and the posts were as well. I liked how Ms. Spiegelman’s class had various people writing posts; not just the same person.

2.What makes a great blog?

A great blog will be colourful, creative and eye-catching. In other words, it will make the audience or readers have a desire to read it when they just take a quick look. Of course, it will also need good posts. A bad blog, will be the absolute opposite. If you are more of a visual learner, you could take a look at the “comic” underneath. 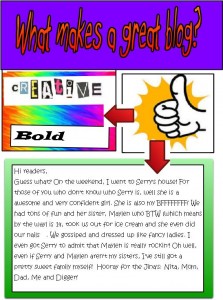 My voki for blog challenge week 4.  It gives information about UNICEF.

A is for A.R. Rahman, a great musician. He is the only person from Bollywood to win an oscar. He recieved it for Slumdog Millionares “Jai Ho!”.

B is for Bollywood, the Indian Film industry. They can make over 100 movies a year.  Most actresses and actors have international recognition, such as Miss World.

C is for channa bhatura, a Punjabi meal.  It is chickpeas soaked in a delicious gravy served with a thick flatbread cooked in oil. Be sure to try it!

D is for democracy. Indians fought hard and long to have their motherland returned to them. Many revolutionaries like Mahatma Gandhi and Chandra Shekhar Azad shared the same goal, but not the same path.

E is for emperors. India had many and was a rather rich country until the British invasion in the 17th century. Ashoka and many others had wise men in their court who might have advised them to build monuments. For example, Ashoka left the Ashoka pillar and the chakra (wheel) which would later be used as national symbols.

F is for fortress, each emperor  had one. Perhaps you have heard of the Red Fort in Delhi, where the prime minister raised the Indian flag on August 15th, India’s independance day.

G is for gold. In India much of jewellery and idols are made of gold. There is temple in the south called Tirupati, it is the richest temple in the world. When women are married they will wear a mangalstutra, a necklace to signify that they are married. Not all states follow this practice, though. Both examples are usually gold.

H is for henna. Henna or mehndi is a herb made into a paste which is then used for designs on the hands, feet and arms on special ceremonies. It can be used for performances, marriages and other such occasions.

I is for Indra. Indra is king of the devas(celestial beings) in Hindu mythology. He carries a thunderbolt as his weapon and lives in Mount Meru in heaven. His wife is Shachi devi(goddess) and his brother is Agni, god of fire. He is also the god of thunderstorms and rain. The devas main enemy is the asuras, the exact opposite of the devas.

J is for January 26th. This day is India’s republic day. It is a national holiday. It happened in the year 1950.

K is for Kiran. This Indian girl name means ray of light. It is popular and many people use the name. Some famous people are Kiran Rao(Indian film producer), Kiran Bedi( Indian social activist and former police officer), and Kiran Ahluwalia(singer).

L is for lotus. The lotus is the national flower of India. It is very pretty and useful too. The lotus root is eaten, and goddess Saraswati is seated on a lotus.

N is for Nilgiri’s mountains. It is a mountain range in Southern India, Kerala and Karnataka. It has at the least 24 peaks that are above 2,000 metres. The highest peak is Doddabetta. Some peaks include Dolphin’s nose, Kulkudi and Derbetta.

O is for Om. Om is very powerful in Hinduism. It gives power to everything and just saying it can do almost anything. It is often used in prayers and in mention of gods. It is also very powerful in meditation.

P is for pashmina. Pashmina is a material that is used to make scarves, shawls and many more things. It was originally used and created in India. Pashmina is a type of cashmere wool. It comes from a specific breed of goat and it’s name originated from ‘pashmineh’.

Q is for Qutub Minar. The Qutub Minar translates to the Qutub Tower and is located in Delhi. It is the largest tower in India. It is a ancient Muslim mosque covered with inscriptions in Arabic. It is made of red sandstone.

R is for Rabindranath Tagore. He wrote India’s national anthem. Aside from that he also wrote Gitanjali, a peaceful verse. Tagore was from Bengal. He was also the first person who wasn’t European to win a nobel prize(literature).

S is for Sanskrit. although it is not studied anymore, it is still a very important part of India. Many pieces of music and dance of various sorts are in Sanskrit. In olden days, it was neccesary for any important people(monks, kings, queens)to study it. Even people outside of India, like in China and Tibet studied it.

T is for tabla. The tabla is an Indian instrument which consists of 2 drums, hand played. It is wooden and is used all over South Asia.

U is for Udghattita. It is a position done with the feet in the classical dance, Bharatanatyam. In this position the foot rises until all the pressure is on the toes.

V is for Virender Sehwag. He is the opening batsman in cricket IPL for the Delhi Daredevils and also plays in the national championship on India’s team. He has 2 children.

W is for white tiger. An animal only native to India. It is an albino meaning that the real ones will have no stripes and be purely white. They are found in the jungles of Assam, Bihar and the former state, Rema.

X is for Xeldem, Goa. Xeldem is a city located in Goa, India. It doesn’t have any major attractions, but Goa is a very nice place to visit.

Y is for yoga. Yoga originated in India. It is said to bring permanent peace if done correctly. It means “union with the divine”. There are different forms of yoga in Hinduism, Buddhism and Jainism. Some experts of yoga can bring out their limbs and put them back in at will.

Z is for zero. Zero was invented in India, actually much of our number system is based on the ancient Indian one. In math at the time India was one of the most advanced number systems, it was quite similar to the one we have today. It was established in the golden age of the Gupta’s.